Posted by : Uddin bireun July 20, 2009
I have found very few uses for the "Difference" layer option. This is an exception. I've used this technique to make some nice wallpapers, which are available at the bottom of the page. 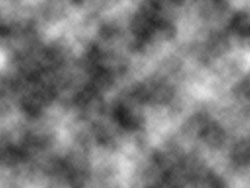 Choose the colours black and white (if they're not already selected), and click Filter > Render > Clouds. 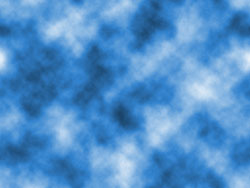 In the Hue/Saturation properties (press Ctrl+U to access them), select "Colorize", and move the Hue slider until the clouds are a realistic blue colour. 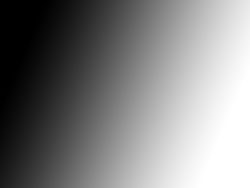 Make a new layer above the last one.

Use the Gradient Tool to put a black-white gradient across it. 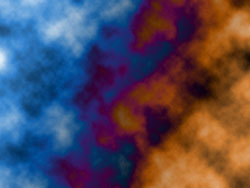 Click on the layer Mode (where it says "Normal"), and change it to "Difference".

This is the Help File explanation of what's happened:

Essentially, what has happened is that where your gradient layer is black, nothing happens (note that the clouds at the left are the same as the clouds you had before, because the gradient is basically black).

However, where your gradient is white, the clouds are inverted, with the blue areas becoming orange, and the white areas becoming black, which looks a lot like fire and smoke. 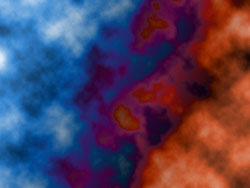 The final step is to change the orange to red. (Of all the combinations, blue and red looks far more appealing and realistic than the others.)

After having merged the layers, bring up the Hue/Saturation options again (Ctrl+U), and select "Reds" on the menu. Adjust the Hue, Saturation and Brightness just a little bit, until the orange clouds have gone a reddish colour. (Don't move the sliders more than a touch - if you try to get a pure red colour, an unsightly line will appear.)

If you want to do something psychedelic, just go to Master (not Reds) on the menu, and shift both colours - you can make pink and green clouds if you like. :)

This is a link to a full-screen nebula. It makes a great desktop background. Click on the link, and right-click the image when it appears.